Ben, the Race Director of the Ochil Ultra, got in touch in August. He wondered if I could make bespoke trophies for the race which was to be held on 30th September 2017.

The Long Ochil Ultra is a gruelling 50 mile cross country race that follows the Core Path Network from Stirling to central Perth. At 30 miles long, the Short Ochil Ultra starts 20 miles into the 50 mile race at Glen Devon and ends with the Long race in central Perth. Keep It Simple, the company that Ben runs with his dad to deliver chip timing services to running, cycling and triathlon events, organises the race. 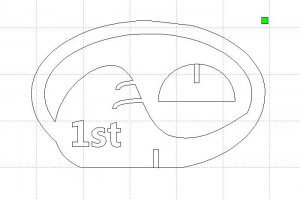 Ben wanted the trophies to be based on the Ochil Ultra race logo. He liked the idea of using green Perspex to match the shade of the logo and he wanted them to be free standing.

Ben sent an artwork file of the logo and a drawing showing where he’d like 1st, 2nd and 3rd to appear. As the bottom of the logo is curved, he added that he wanted the trophy bottoms to be flattened off so that they’d sit well and not rock.

Initially, we looked at using 10mm green Perspex as it’s the thickest I can cut. We wanted the trophies would be wide enough to sit on their edges. Unfortunately, it was hard to find 10mm green Perspex. There were lots of shades to choose from in 3 and 5mm instead. Ben chose a green shade in 5mm and I designed a slot system to function as a stand. 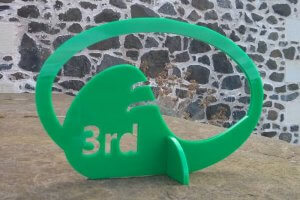 I created a proof for the artwork. It showed all the cut lines for the trophy outlines, text and stand arrangement for Ben to approve. Once the Perspex arrived, I checked its thickness to make sure that the slots would fit accurately. Then I cut all the trophies.

Ben wanted five of each of 1st, 2nd and 3rd. He also asked for six blank trophies as souvenirs for the veteran categories.

Have you got a project that you think we could help you with? Contact us or ask for a quote.