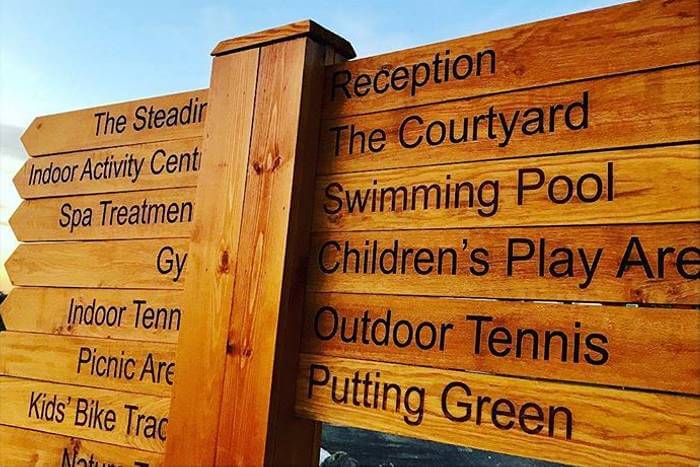 Eilidh from Morton of Pitmilly Countryside Resort needed a new sign post to direct her visitors around the site and asked if I could help. She’d seen a laser engraved wooden sign that a neighbour had commissioned, thought it looked very smart and was interested in something similar.

Eilidh wanted a central post to stand outside reception with 14 fingers. She gave me a list of what was to go on each finger and which were to point left or right so I’d know which way round to engrave them.

Eilidh wanted a clear font, so I chose Arial and created a proof to match the wooden finger dimensions that she wanted. We decided that the text would be 70mm from the edge that would be inserted into the uprights. This would make sure that the text on all the fingers would be the same distance from the post, whichever side of the uprights they were on.

Wood to last the test of time

Eilidh contacted Frazer from FAR Cabinet Makers about the wood for the sign. As it was to be located outdoors, it was important to select the right wood. Oak always costs more, but it’s very beautiful and takes laser engraving very well. After some thought, Eilidh knew it was the right choice and would give the look that she wanted.

When the oak was ready, I invited Eilidh to visit the workshop while I engraved the first finger. She had been considering colourfilling to make the text on the sign stand out, but I was convinced that this would not be required. If she saw the engraving and how it looked, she could decide for herself.

Eilidh and her mum were fascinated to see the laser at work, and completely agreed that the engraving was deep and dark enough to be clear. They picked up the fingers when they were all finished and their handyman assembled the sign and treated it for weather protection.

Have you got a product you’d like to develop but aren’t sure how? Contact us or ask for a quote.